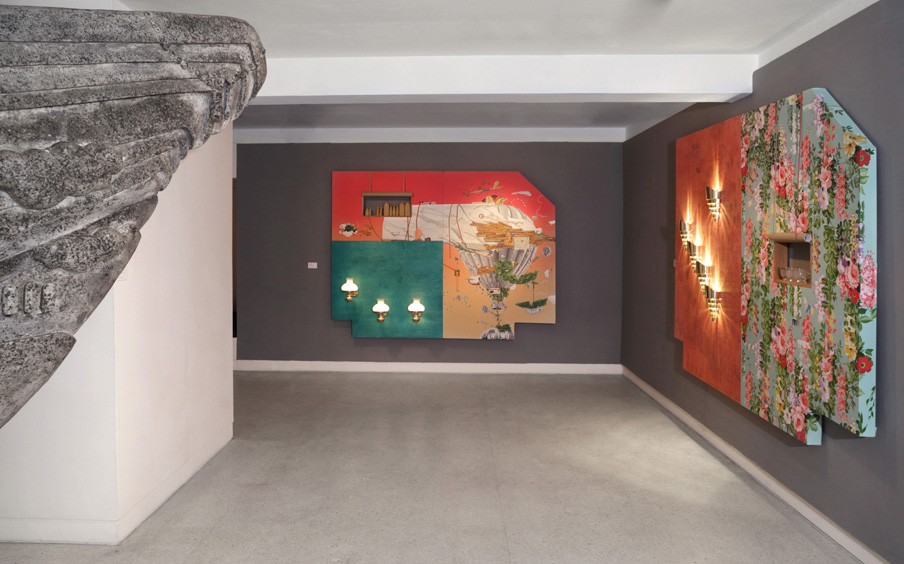 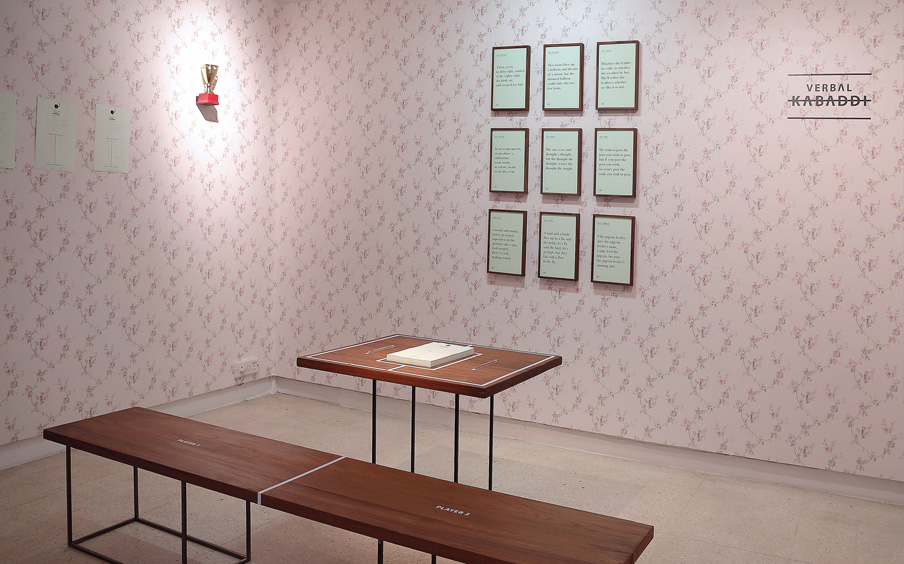 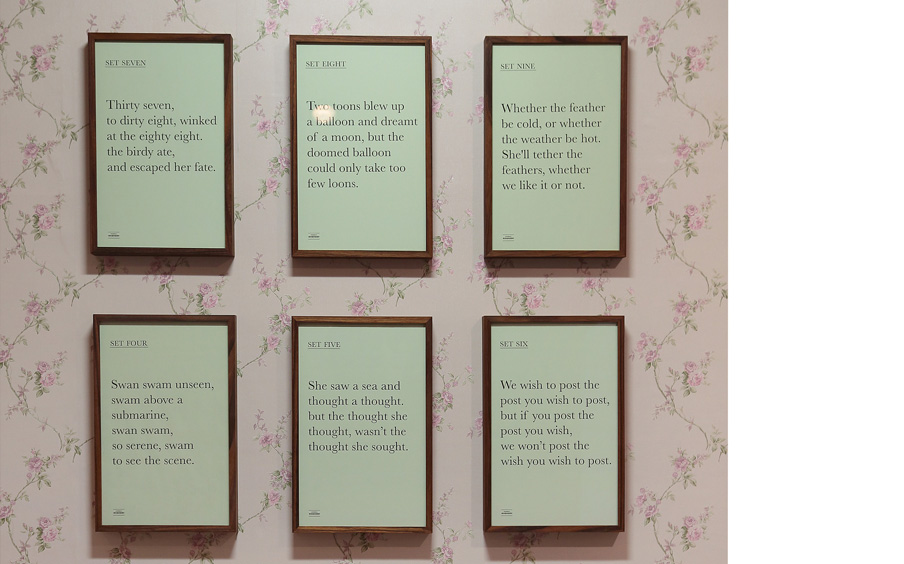 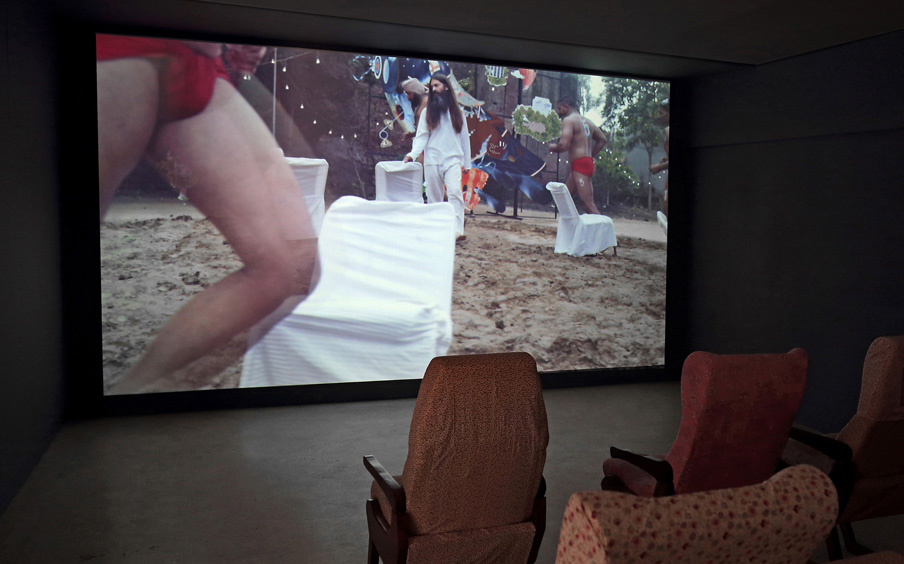 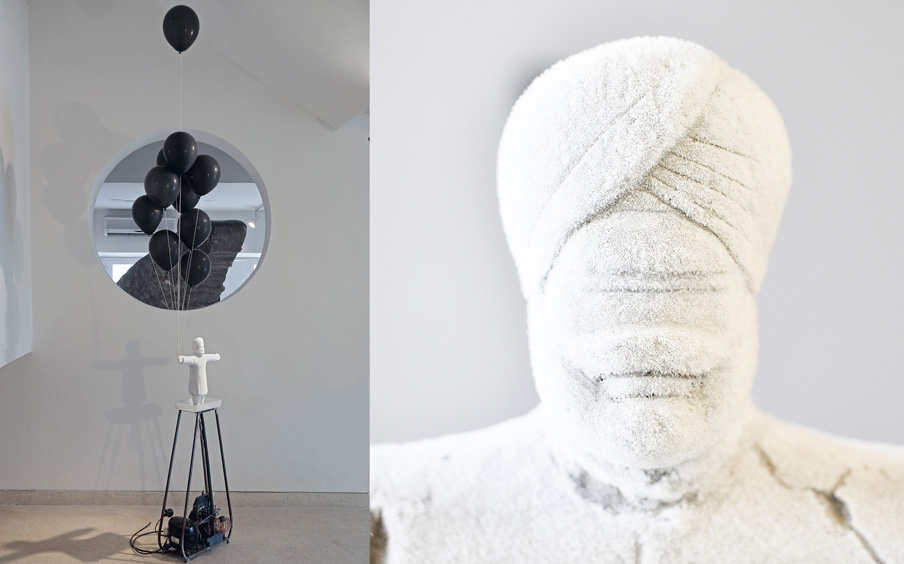 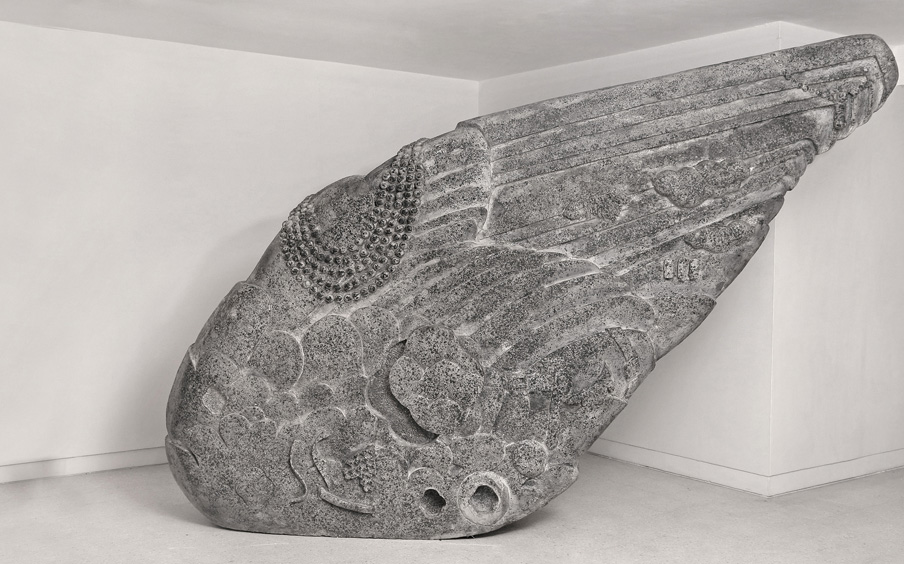 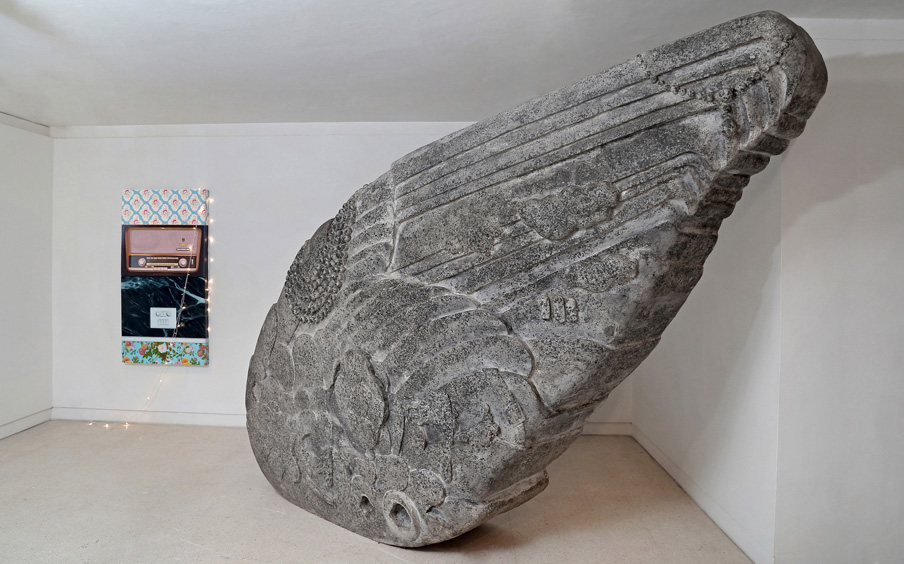 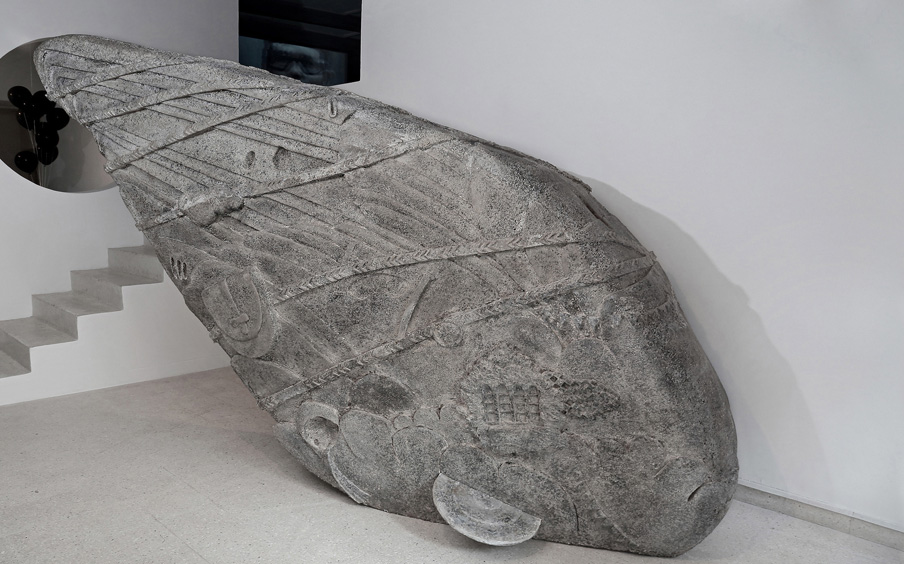 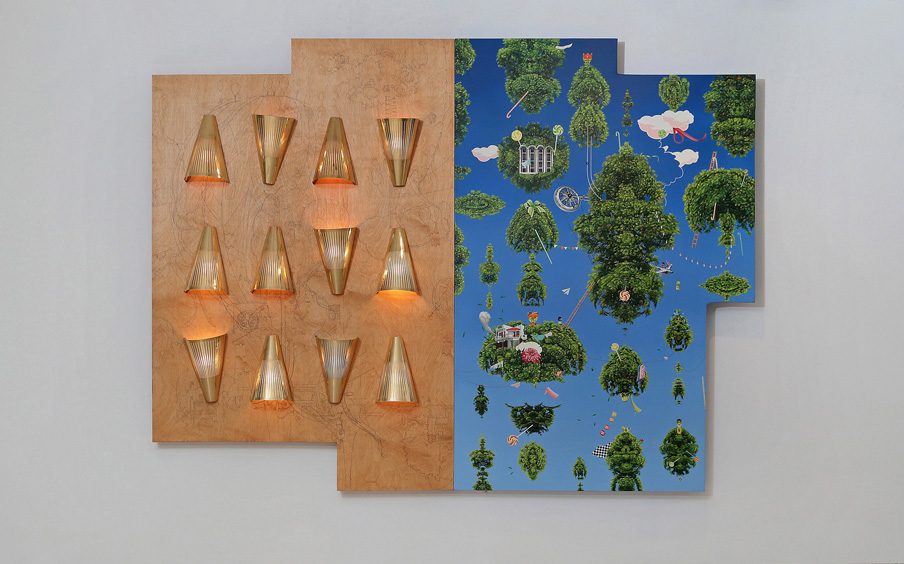 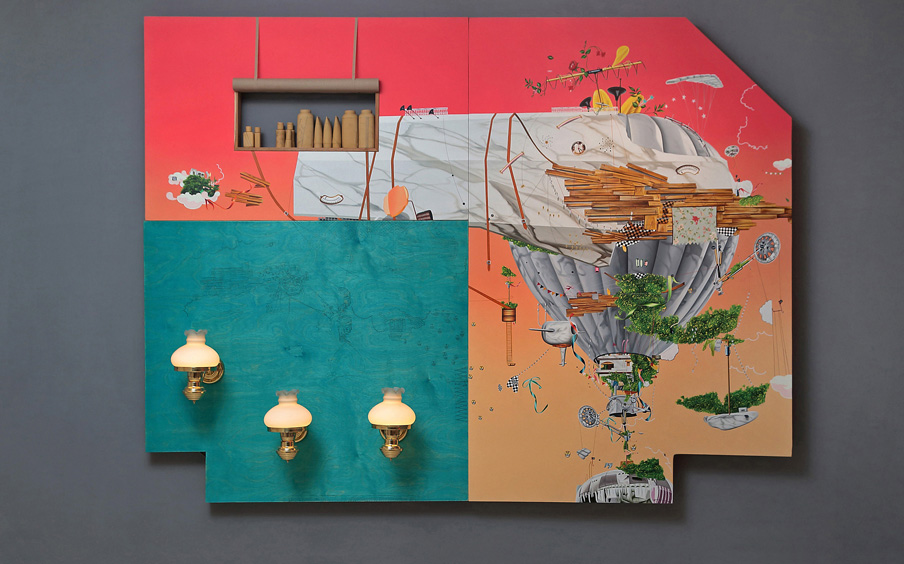 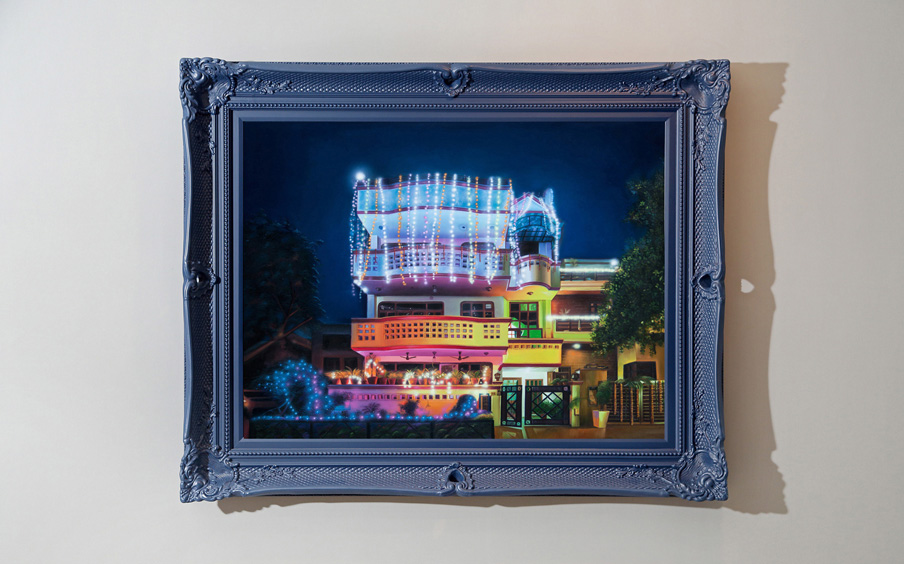 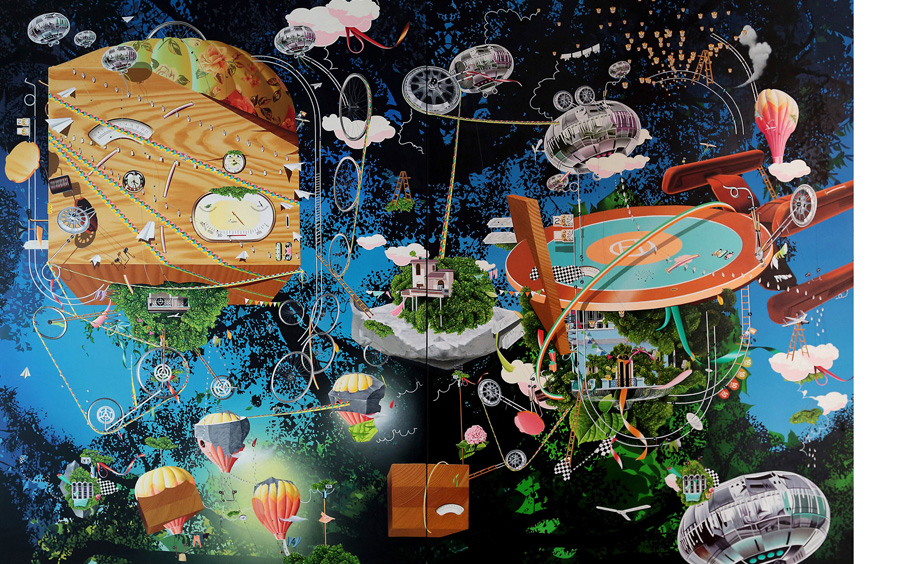 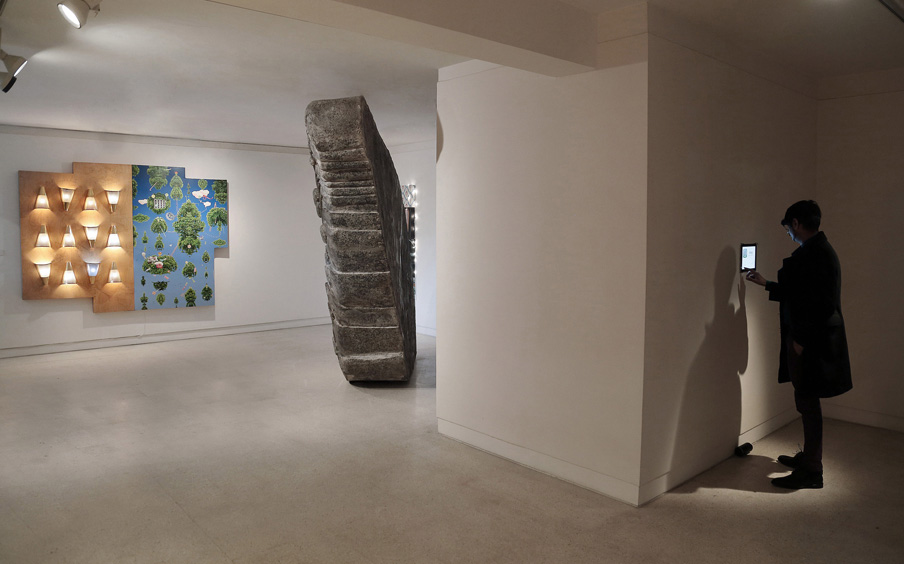 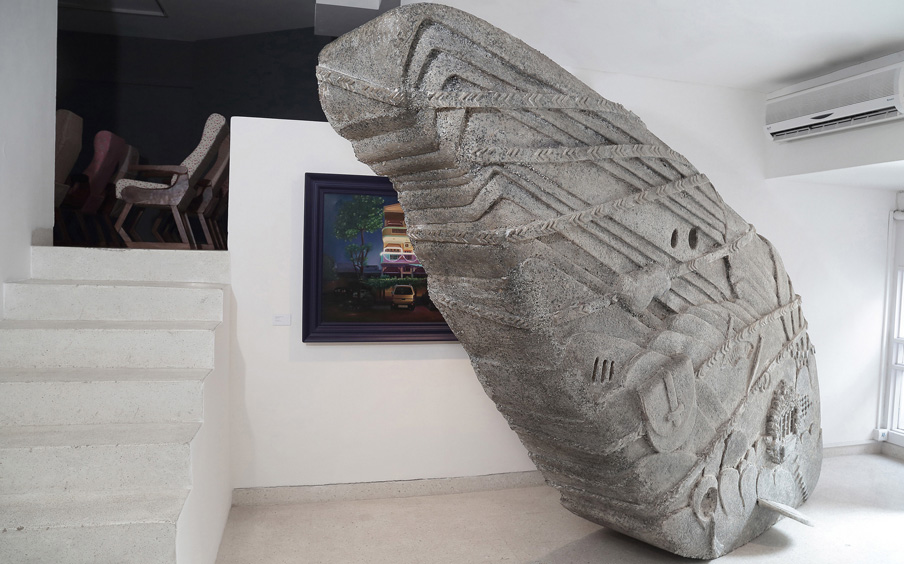 The exhibition of new works by the artistic duo of Thukral & Tagra continues the development of the film entitled “Q,” the first scene from which served as the centerpiece of the artist’s exhibition at the Famous Studios in Mumbai in November 2013 and will be part of this exhibition. It starts with an akhara (a traditional Indian wrestling club) and employs the artists’ paintings as backdrops for a performance event to develop themes of competition, longing, community, and growing-up. A second scene of “Q” has also been finished for this exhibition, which will be rounded out by new paintings and sculptures. With these, Thukral & Tagra continue their exploration of middle class Indian values through such icons as the dream home, festive decorations, consumer affluence, and fantasy escapism.

Thukral & Tagra work collaboratively in a wide variety of media including painting, sculpture, installation, video, graphic and product design, interiors and fashion. In their production, they blur the lines between Fine Art and Popular Culture, product placement and exhibition design, artistic inspiration and media hype. Their works comment on the globalization of consumer culture and the repercussions of this as it is being experienced in India today. While both playful and humorous, their works express thoughtful questions about the nature of Indian identity as it is articulated by Indians themselves and projected on to India by the rest of the world.

Jiten Thukral was born in 1976 in Jalandhar, Punjab, and received a BFA from Chandigarh College of Art and his MFA from the Delhi College of Art. Sumir Tagra was born in 1979 in New Delhi, and received a BFA from the Delhi College of Art and later studied at the National Institute of Design in Ahmedabad. Thukral & Tagra have worked together since 2003 and have held solo exhibitions of their works at Nature Morte in New Delhi (2005, 2007, 2011), Nature Morte in Berlin (2009, 2012), Chatterjee & Lal in Mumbai (2008), Bose Pacia, New York (2007), Arario Galery, Seoul (2010), the Singapore Tyler Print Institute (2010), and the Ullens Center for Contemporary Art, Beijing (2010). In 2007, Nature Morte presented their solo installation entitled “Adolescere-Domus” in the Art Statements section of Art Basel. Their works have been included in group exhibitions at the Mori Art Museum in Tokyo, Essl Museum in Vienna, Queensland Art Gallery in Brisbane, Centre Pompidou in Paris, MAXXI Museum in Rome, the Kennedy Center in Washington D.C., the National Museum of Contemporary Art, Seoul, among many others. Among their numerous projects, they have been commissioned to create works by the Italian fashion house Etro, the Meissen Porcelain Manufacture in Germany, Absolut Vodka, and Conde Nast India.