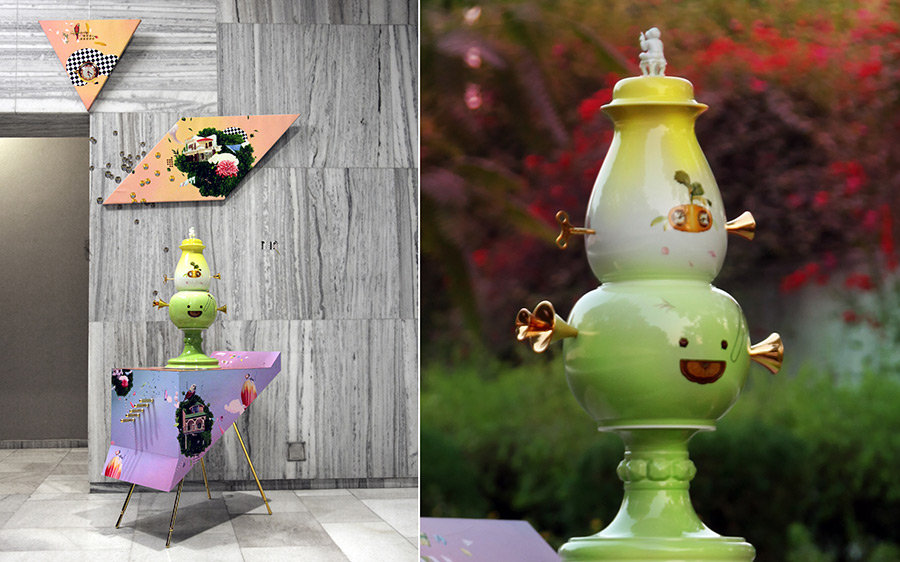 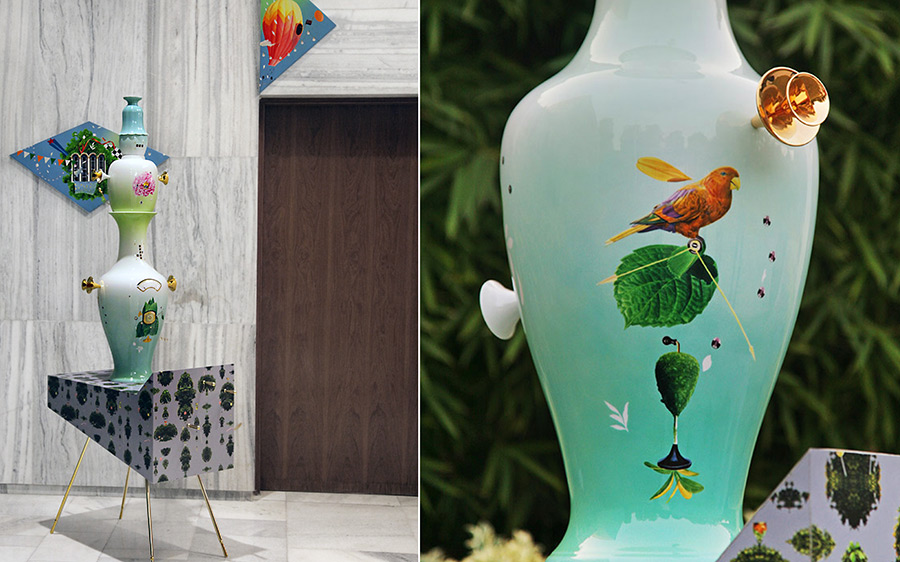 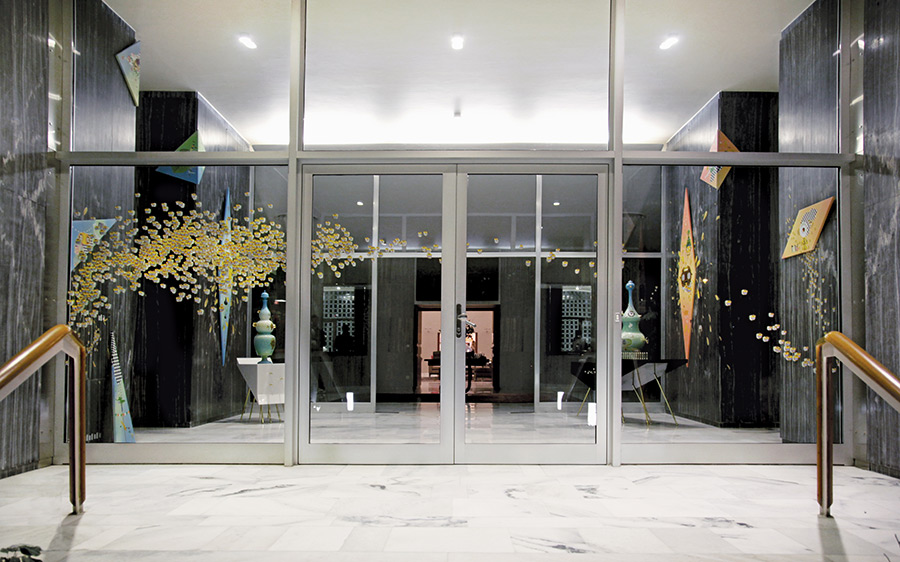 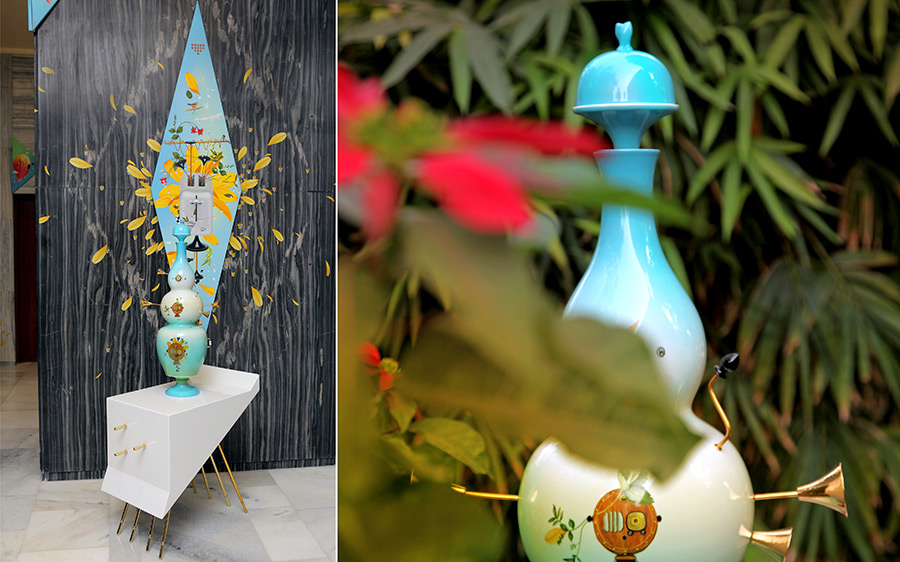 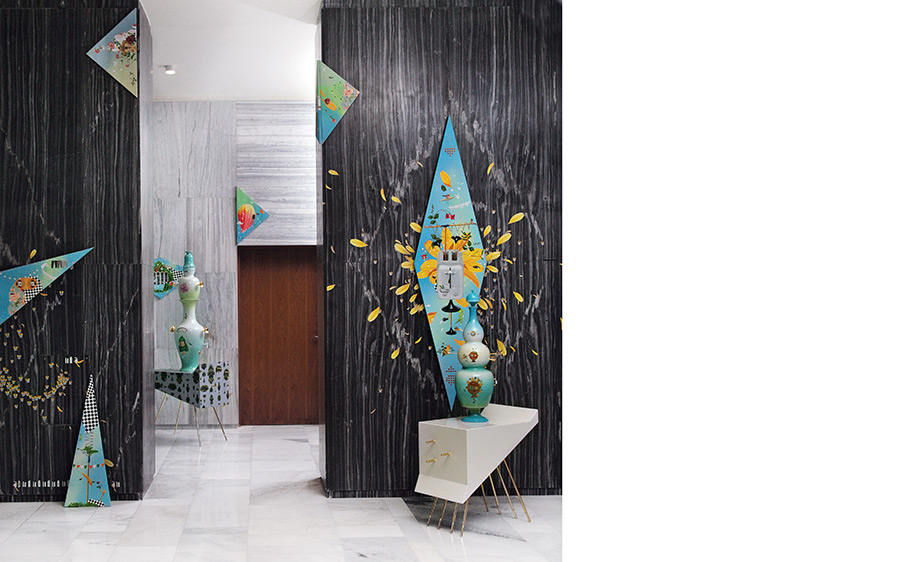 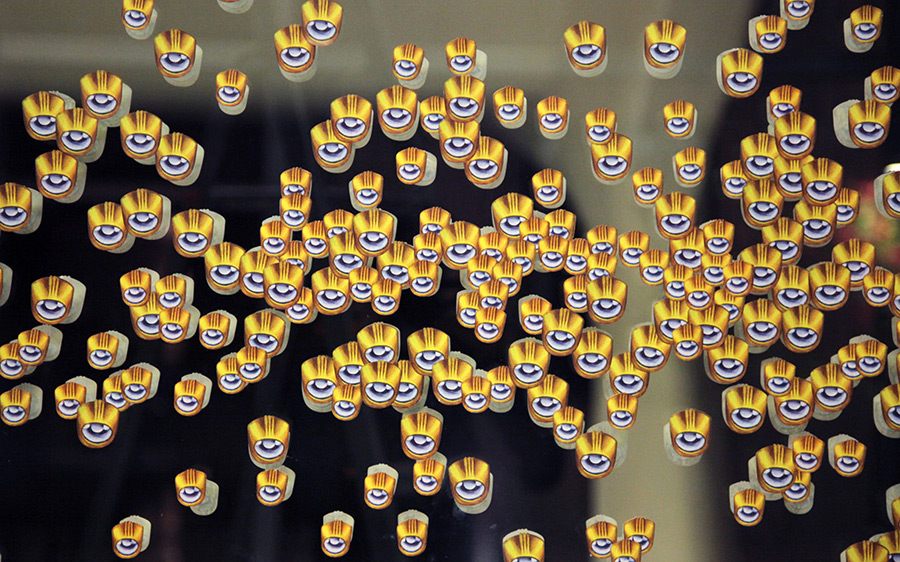 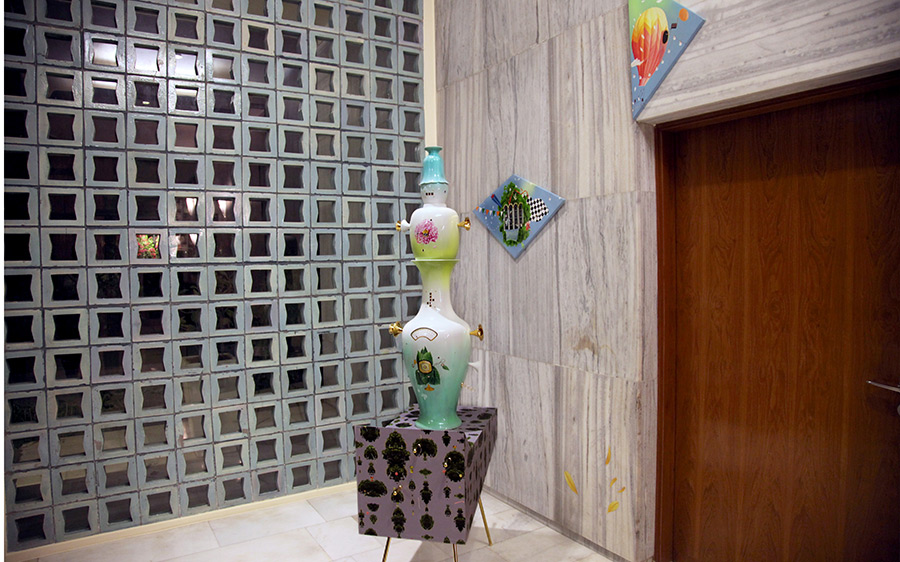 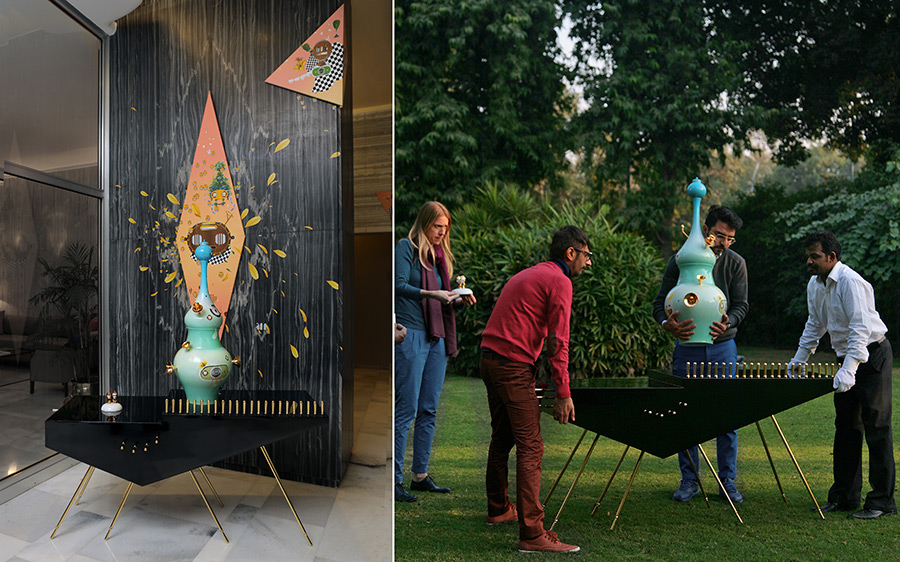 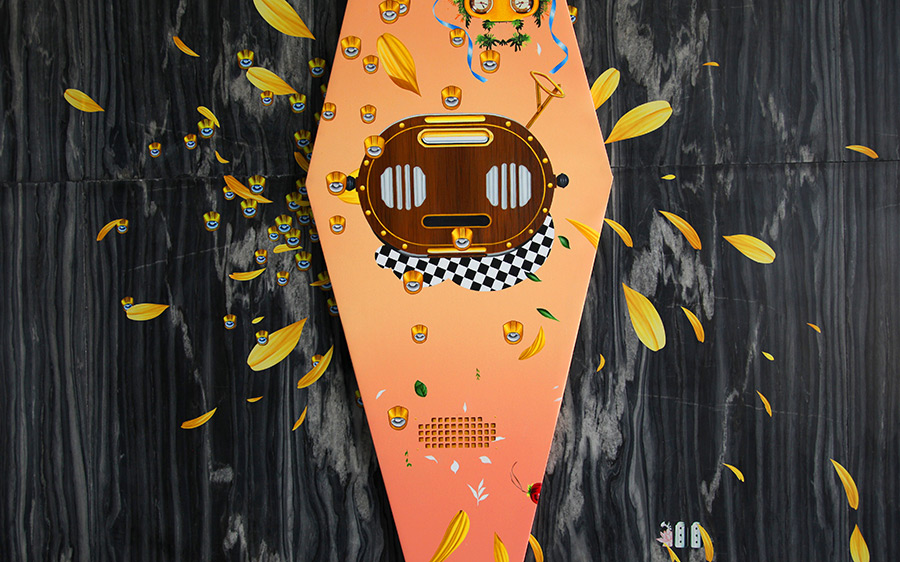 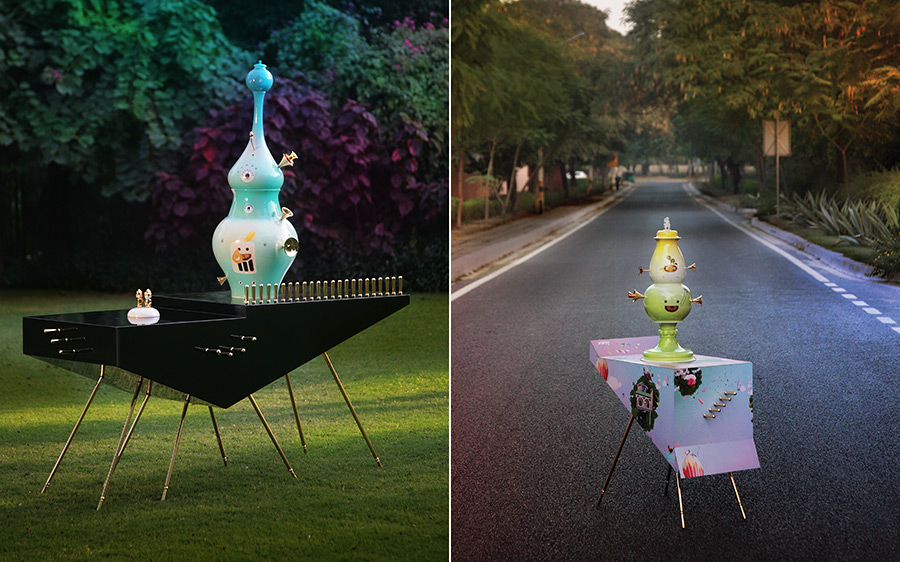 A successful start has been made with Thukral and Tagra, with the installation designed for German Embassy, Delhi building opening up a multilayered interaction of references.

The artists have brought an initially alien colourfulness as well as ultra-contemporary opulence to the embassy’s rational and cool elegance. It could also be said that the cultural mix of the exterior have been brought to the interior.

The walls are adorned with brightly coloured paintings in the form of large and small diamond shapes on which toasters, radios, flowers, gardens, birds, clocks, full clothes lines and grandiose buildings are portrayed. These are cult objects for the Indian middle class which hold out the promise of an ideal lifestyle based on an urban consumer culture. This is still out of reach for most Indians, who therefore have to postpone their wishes until tomorrow. “Longing for Tomorrow”. Reality is an illusion and this daring combination

of elements is not only there to be observed but also to stimulate the imagination. The pictures recall mannered sketches whose modern montage language the

media helped to formulate. Elements which space and time, which systems

of concepts, normally keep apart are brought together here on an imaginary stage. It also represents India’s landscapes – with their own idioms and languages.

Together with the furniture pedestals, the artworks entitled “Dream Machines” spread throughout the room contrast starkly with the room’s modernity. The pedestals whose slanted, gilded legs remind the observer of occasional tables or pinball machines, are slender and reminiscent of late 1950s furniture, which was regarded as very modern and represented a radical break with the conventions of the rational Bauhaus tradition. They provide aesthetic bases for unusually large and coloured glazed porcelain sculptures. They can hardly be described as merely functional. They challenge our idea of a neutral and functional pedestal in a most beautiful way and are thus an integral component of the sculpture. The shape of the pedestals critically questions the white cube ideology and the neutral presentation forms of Western modernism to which India had no access for a long time.

The porcelain objects themselves were made in Meissen, the oldest porcelain manufactory in Europe. It was founded in 1710 by August the Strong. To the present day, porcelain from Meissen is one of the best known luxury brands, highly sought-after throughout Asia and a status symbol of the highest quality. T&T were asked to take part in a residency programme in the Meissen manufactory. They worked there for six months, creating a series of sculptures which found a completely unique and contemporary language in terms of form and glaze. The fragile works of art are based on old, traditional and precious forms of manufactory. The sculptures could be said to be a derivation from tradition, for T&T have been inspired by the manufactory’s traditional forms to create something completely new. With the perfection needed to manufacture porcelain, T&T have created a freedom of form which would have been inconceivable before numerous experiments. Using an old technique, funnel-like and totally absurd applications which display a great deal of irony have been fixed to the new products. The glaze colours which are deal of irony have been fixed to the new products. The glaze colours which are very unusual for Meissen were found after many months of experimentation and were a great challenge for the manufactory. However, this inimitable colourfulness combines the objects and their aesthetics symbiotically. That is the unique quality of Indian design and art.

Fortunately, T&T insist on the “indishness” of their works and thus highlight the distinctive nature and validity of all cultural values. Thus, yesterday can get better if we take the past as a prerequisite for life today.